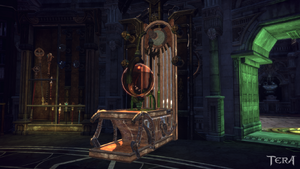 Alchemy is a crafting skill in TERA that allows players to create dyes, potions and other useful items.

Alchemy requires a variety of different items that be acquired by energy harnessing and purchasing items from NPCs.

There are 22 different alchemy recipes sorted into four categories for players to learn and craft. They are: Jewels, Potions, Additives and Dyes.

Alchemy was originally used to craft Potions, Elixirs, and Scrolls used to heal players and give them buffs.

In December 2018 there was a major update to the crafting and gathering systems in TERA, which changed the Alchemy skill into what it is today[1]. Alchemists lost previous recipes with the introduction of Prime Battle Solutions, Prime Recovery Potables, Prime Replenishment Potables, and others.

When the Guardian-Frostmetal-Stormcry Gear System was introduced, the ability to craft Emeralds and Diamonds, which are used in enchanting, was added. With phasing out that gear jewels are now only used to upgrade Fishing Rods.