Brawler is a specialized tank class with heavy armor and powerfists weapon. Brawlers can block damage and quickly retaliate with devastating blows. As they use powerfists, they can build up rage which is used for unleashing powerful attacks.

The brawler is an offensive dynamo with exceptional tanking capabilities, heavy armor, and massive powerfists that both dish out and block damage. She sends enemies sprawling and flying before her, helpless in the face of her fighting prowess.[2]

Brawler is one of the "new" classes, released after Reaper and Gunner. Brawler release totally changed tanking in TERA. Before brawler tanks were very low damage. It was not uncommon for lancers to use only aggro crystals, since they were only meant to keep boss attention, not to do damage. After brawler tanking became much more active. Also other tank classes (except berserker which only got tanking half year earlier) were updated to new high damage spec. As released brawler was totally OP, doing usually more damage than DPS classes.

After several balance rounds and Apex skills damage difference between brawler and lancer is not so high anymore. In late 2020 devs decided to buff DPS classes compared to tanks (Kaia's Soul Gear alone had +5% damage to dps that tanks didn't get). This was hard time to brawler that mainly relies on doing damage to hold aggro. In late 2020 brawler got aggro buffs 3–4 patches in row. Also brawler got party-wide buffs to allow others do more damage, which it earlier didn't have, as a part of Apex (Rhythmic Blows gives boss a debuff) and Skill Advancementment systems.

For more details on this topic, see Metal armor and Powerfists.

For more details on this topic, see Brawler skills.

Brawler is tank class and must keep boss' attention on dungeons and attack from front while also blocking attacks.

Main brawler damage dealing skills are Jackhammer, which also gives boss debuff to allow others to deal more damage, Piledriver and Haymaker which is your main damage skill.

Brawler has special skill Roundhouse Kick, after which next attack skill (of the three mentioned) will block damage. This allows brawler block boss attack and DPS same time.

Furthermore after raising their Rage to 100% (which can be done with skill Mounting Rage) brawler can activate Growing Fury. During the time brawler can keep their Rage up and this skill active every attack skill blocks. Spending some glyph points to let skills generate more Rage might be needed.

Brawler always blocks damage with Ground Pounder. This can be used if Rage falls and brawler loses auto-block. It's also good damage skill with triple crit chance and high base damage. After aggro buffs this skill also draws high aggro. It should be avoided while in DPS mode.

Brawler is somewhat weak against non-blockable special attacks some dungeons have. Quick Dash is your only iframe to avoid those kind of attacks. It can be cast twice before cooldown happens. Glyphing this skill to lower cooldown is necessary in harder dungeons.

Brawler is very strong against huge groups of enemies. Mobs can be gathered together with Bull Rush, using Ground Pounder staggers the enemies who can't dodge. Third hit of Ground Pounder throws enemies into air, during which they can be caught to Meat Grinder. Attacking multiple enemies quickly loads brawler's rage, which can be used to cast Rampage which also staggers enemies. Similar tactics are used in PvP.

Additional active skills that brawler gets when awakened are One-Inch Punch, Flying Kick and Rhythmic Blows. Brawler Apex changes are quite small and easy to learn and master.

One-Inch Punch works as high-damage filler skill, and must be chained after any other attacks.

Rhythmic Blows is high-damage ultimate that also works as boost skill brawler lacks. Skill has total 5 hits and action button should be pushed 5 times to finish the skill. This skill has high damage, it's basically auto-critting and has very long cooldown of 5 minutes. It should be always saved to boss enrages. Skill also gives target Internal Wounds debuff, which helps others to deal more damage. In addition Rhythmic Blows reduces cooldowns of all other skills by 5 seconds (when hit full 5 times).

Flying Kick is fast filler skill, that can be chained after any other attacks. It moves brawler forward and is therefore sometimes used to jump fast forward to gain distance or escape. Hit with this skill reduces Rhythmic Blows cooldown by 10 seconds.

Brawler also gets Self-Control passive, which increases damage 5 % while rage stays over 75%.

Only humans, Elins and Popori can become Brawlers, so there is no customization in regards to racial traits.

Indomitable Spirit which aid them in PvP fighting other players,

Resilience of Body speeds up HP recovery after resurrection.

Velik's Horn to teleport to Velika.

Optimal crit factor for brawler is between 160–270. These values are within 1% of theoretical optimum for all gear between Guardian and Heroic Oath.[3] (note this was before Exodor patch changes. Check discord for current info.)

On level 69 brawler also gets option to play as back-attacking damage dealer class.

With patch 93 new passives some brawler skills scale with physical amplification value. This is a stat that increases your attack anyway, so this doesn't make your gearing different.

Wrathful crystals are not available anywhere while leveling. You can still get low-level Wrathful with Crystal Fusion. Fuse extra crystals you got while leveling and keep Wrathful if you happen to get one. It's close to OP while leveling. May be that's why it was never added to crystal shops.

For more details on this topic, see Brawler glyphs.

These are your main damage skills.

Roundhouse Kick is used for blocking and for damage buff.

Piledriver becames good damage skill after apex glyph is unlocked. Before that it's mainly used to reset Roundhouse kick.

More Rage is needed and some of these glyphs should be used to keep it 100% during Growing Fury.

Growing Fury should always be on during dungeon fight.

This is definitely needed in hard mode dungeons.

This is main skill in PvP.

This is stun attack mainly used in PvP.

Mainly needed in PvP, although skill is good in PVE too.

EP Damage is generally not useful.

Actually many options in this section are useful. Your pick.

Haymaker: Resonance is option you generally use while tanking. It gives party +2% more damage on boss. Be sure to hit Haymaker least every 10 seconds to keep this buff up.

Haymaker: Weak Spot Thrust is part of DPS mode. It should be used with Growing Fury: Irregular.

Brawler uses similar card set up as DPS classes with no special needs. 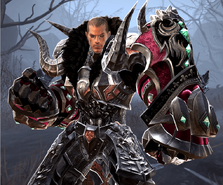