Breakaway Bolt is an active skill that can be taught to archers at level 10 and is able to be ranked up at later levels.

Breakaway Bolt can be preformed with a bow by the archer. Preforming this skill allows the user to instantly send a bolt toward the ground, causing damage and blasting away the archer while giving it enough distance to load another skill, or escape. Amount of damage dealt varies dependent on skill rank.

To upgrade Breakaway Bolt to the next rank, one must find a Tactics Instructor and pay a certain price of gold which is dependent on rank.

For more details on this topic, see Archer glyphs.

To glyph Breakaway Bolt, a glyph must be obtained and learned only once. At level 60, a character has 50 glyph points available to spend on all available archer glyphs. Most glyphs, specifically common glyphs can be purchased from a glyph master, while fine glyphs must be looted from enemies. 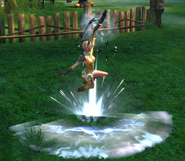