Edit
watch 01:36
We're Getting Mutants in the MCU - The Loop
Do you like this video?
Play Sound
Located In
Continent: Southern Shara
Province: Westonia
Zone: Mount Tyrannas

Citadel of Torment is one of the locations in the game TERA. It an open world Non-instanced dungeon in Mount Tyrannas, Westonia, near town of Acarum.

Citadel has very complex layout. Entrance part has six levels and route to Catacombs part, which has three levels. Necromancer Tomb story dungeon in found on the lowest level.

First part of Citadel mainly comprises the long stairs that lead all the way up to the top level. Staircase has numerous side corridors and chambers on every level.

Some of the ancient creations of Thulsa are locked here. Thulsa is said to have created these monsters using necromancy in the Citadel of Torment. Gardan is one who has been discovered.[1]

Many rogue vampire maidens work with the remaining Witches of Vadoma to conduct crude magic. The halls are flooding with gore and the walls are spattered in blood.

Ages ago Amani warriors stormed Citadel of Torment with Kaidun himself. By the time they realized the halls were filled with the worst nightmares, it was too late to retreat. Thulsa sent the Cursed Vampir Gentlemen and Infernal Jesters to attack them. Most of them went completely mad, and some changed into hideous creatures. Some of his comrades were turned into Eldritch Defenders who now patrol the main stairs.[2]

The vampire lords and maidens have taken over the east wing with their undead brutes causing chaos elsewhere. Lower level was for ladies, Vampire gentlemen habit the Hall of Masters.

Corrupt and sadistic Curser Jesters make this their home. They constantly cause chaos amongst the inhabitants and take joy in ending their lives. The disease from the Vertigo Reach floods in through cracks in the ceilings and cause madness to spread through the halls. There is also a room with Toxic Jesters you have to find.

Strange shapes have been seen in the clouds around the terraces and edges. Monsters of pure mist wander the halls. A strange fog spreads an odd disease, similar to the Mad Blood disease, that is adding immensely to the torment of those inside.

They could have put some secret or easter egg or world boss here. They didn't. It's just Malevolent Wraiths.

Within this highest portion of the citadel, horrible torture is committed. The few who survived these acts soon found themselves jumping off the terraces. Ending any source of suffering up here would be the most honorable and respectful thing someone could do for them now.

If previous levels had Vampirs and Jester, now you have both in same room. There is one bigger room in east side. If there was something, it's long been removed. There is a statue of the same guy as main stairs have. It doesn't look like Thulsa 'thou.

South of the main stairs is why you come here. Last room on west has broken roof and floor and you can jump few floors down into the Catacombs.

Sub levels aka the Catacombs[]

If you entered this area by climbing up to Anguish Heights level of Citadel of Torment, then climbed down the broken floors, you end up in Infiltrators Refuge camp. Luckily there's teleport master who can move you between the camps.

This level is totally uninteresting and has about eight copypasted rooms with same odd plant thingie and two Lokian Blood Guard Lancers. Main point is to find stairs down. Well, there are also eight stairs down, so it's not too hard, and you end up in some part of Catacomb of Misery. 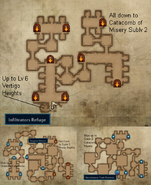 Shieking Catacombs copypaste room, they all look the same

other room, or the same

Federation Sanguine Hideout camp is located on north-eastern part, almost along the only route from left side of map to right.

Lowest level of the Catacombs. There are stairs where you can descend to this level. Area is quite large, but there are only few types of rooms that are copy-pasted few times, in addition to few big halls. You will get lost without looking the map.

Your aim it to navigate through Rotting Prisoners, Melkonari Magisters, Ebon Inquisitors and disc reapers (you thought you never see these guys again!) to the southmost middle chamber to the Necromancer Tomb teleporter. Or just use vanguard menu or teleport scroll to get there.

There are lots of additional quests from the camp on upper level.

Citadel of Torment seen from outside