"When you’re killing monsters and saving the world, it’s important to maintain your keen fashion sense. You don’t want to immortalize last year’s trends (so five minutes ago) when someone snaps your image for the cover of the Castanica Chronicle. TERA costumes ensure you look damn sharp achieving greatness on the battlefield[1]."

Costumes are used to change a players appearance. Costumes do not increase or decrease a players stats. They are cosmetic only and not necessary for any part of the game. Costumes become soul-bound when equipped, meaning they cannot be traded or given to another character once worn. Also body costumes are tied to race, so changing a character race make costumes useless.

Previously, costumes could be purchased to only last for certain periods of time, like 7 days and 30 days. This is uncommon now with almost all costumes that are sold being permanent. Some costumes are available with Fashion Coupons earned in-game. Many events also give costumes. And there is always cash shop which supports TERA's free-to-play model.

Weapon Skins (Weapon costumes) change the appearance of your characters weapon. Weapon costumes are different for each class. These items generally make a players weapon silly or cool.

Hair costumes are worn on top of your characters head. These items are generally things like headbands and hats.

Face costumes are worn on your characters face. These items are generally things like glasses and masks.

Costumes had different naming between En Masse Entertainment and Gameforge versions of TERA. This happened least after 2015. After North American publisher EME was closed Gameforge took over NA servers too and all the new costumes and everything that is sold has same naming on all servers of PC TERA.

Developer Bluehole took over publishing console versions from EME and translating client into English. This means that in some cases naming is different between consoles and PC version. Console naming for items is same as EME used earlier on PC. But still, ie. summer 2021 Atlantis Summer Costumes released on consoles are called Atlantean Guardian's costumes on PC.

But, in addition, Destiny Development made Russian translation of TERA. In same cases, they used English names for some costumes or boxes. So, when a player whose game is set up in Russian links a box they intent to sell, it may have different name than Gameforge English name for the box is. German and French translation mostly don't have this problem since those translations were made by Gameforge, and if they happened to be in English, it would be same as PC English naming. 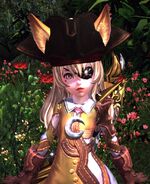