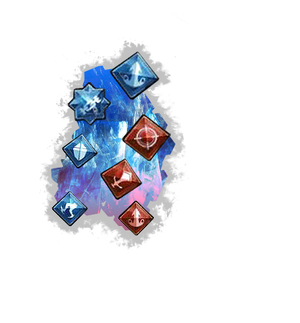 Crystals are upgrade items that can be added to specific equipment items. Characters from any class or race may wear any crystal in the appropriate crystal slot.

Because of this, players can mitigate the limitations of their character's classes (by boosting lacking stats), maximize traits (by adding to the already prominent stats), or simply continually buff the character with more health, mana, movement speed, etc.

Crystals can be destroyed upon character death. This can be prevented with Crystalbind consumable which protects crystals from one death or for limited time. In late 2019 full set of top crystals costs around 30,000

, so using Crystalbinds always is definitely worth it.

When equipped in an item, crystals are linked to that piece of equipment unless removed manually or by switching outfits. If the player removes that item and parts with it (by trading, selling, or discarding), the crystals will also be gone.

Mechanic that existed in TERA since play launch, weapon and armor crystals were phased out with level 68/69 Exodor gear. Accessories Crystals remain in PC versions of TERA.

Crystals come in styles based on the item level and equipment type requirement of the crystal. Rhomb, Cabochon, Hexage, Pentant, Conach, Crux, and Niveot crystals are for armor and weapons. Zyrk and Vyrsk crystals are for accessories.

Crystals can be obtained as loot from killing monsters, purchased from Crystal Merchants, bought on the Trade Broker, and from reputation and alliance vendors.

Crystals are a crucial, but often overlooked, part of TERA's gameplay. Players that fail to use crystals, especially at the higher levels, will soon find themselves performing subpar in comparison to others.