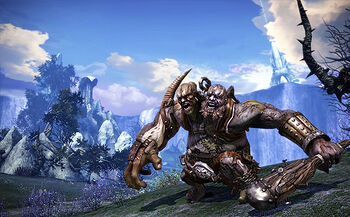 Destroyers are one of the species of enemies in the game TERA.

These horrid abominations are said to have been mortal men at some point. Now, they have been horribly corrupted by the power of the Nexus that several cults have harnessed.

Retrieved from "https://tera.fandom.com/wiki/Destroyers_(species)?oldid=61607"
Community content is available under CC-BY-SA unless otherwise noted.