"Innocent waifs on the outside, immortal spirits on the inside, imminent defeat to the other side."

The elins of Pora Elinu are one of the seven races in The Exiled Realm of Arborea.


Known for their feminine appearance, elins feature unique tails and ears and an almost childlike demeanor even though they may be thousands of years old. The elins are not to be underestimated, as their knowledge greatly surpasses that of the average person. They united with the poporis in order to stop and restore peace with anything harmful to nature.

"The elins have one driving goal: if it’s not good for nature, stop it. Older and wiser than they appear, they join with forces of nature and mortal races to sweep their enemies from the battlefield. Their speech is often dark, forthright, and otherworldly, and their sense of humor can border on vicious. Other races find the elins' manner and behavior off-putting."

"Building corporeal forms around tiny fragments of her own divine being, the goddess Elinu created the elins. Their physical appearance reflected the youngest daughter of Arun's naïve desire for beauty and peace. An elin queen governs both the elins and the poporis, with whom they share a history and a mission. The queen and her forces have proven their wisdom and diplomatic prowess in peace, and their tactical and fighting prowess in war."

"Both the elins and poporis champion the cause of nature, but the bond between them is deeper than that. As a single nation they repair, protect, and preserve the world they live in and love above all else. The popori nation was among the first to join the federation. Recognizing the Argon Invasion to be a threat to all nature, the elin queen promptly rallied all of her forces, popori and elin, to the cause."

"Pora Elinu is not a large city, being wholly contained inside the trunk of a single tree, but it holds a large place in the elins' hearts. Pora Elinu stands as a tribute to the goddess and a pledge to always pursue her goals. When the elin queen has to deal with matters of state, she and her court are found in Pora Elinu, but usually she leads her forces in combat on the argon front."

It's said Elin were created from divine essence of Elinu herself, and are "more spirit than flesh".[2] It's unknown if Elin can truly die, or do they simply "return to the Dream" (of Titans).

An elin looks the same on the day she rises from the waters of Lake Elinu as she does the day she returns to it many years later.[3]

After death of Elinu goddess Seren took over watching the Elins. Seren hide Pora Elinu and Elins from outsiders for a long time. This allowed Elins and Poporis avoid events like Divine War. They were revealed to outsiders only "recently" (this means several hundred years anyway, see note on Elin lifespan). The Popori Kingdom quickly allied with Humans and joined the Valkyon Federation when it was formed due the Argon invasion.

Seren is never seen in game, in fact she has hidden herself from outsiders. Seren communicates with Elin nobility in Dream, and it's responsibility of Elin princesses to interpret her will based on what they see in Dream. Elin queen is mentioned in game. She is never seen either. Elin queen is said to be in intimate communion with Seren. It's unknown if she is dreaming or joined with Seren in realm she has hidden herself into.

Reapers were born when Evil reached Pora Elinu. It's said Rida forged the darkest of elin divine energy into the vengeful spirits.[4]

Some lore from the Western version of game stated that Elins live as long as humans or approximately 80 years. Some observations in game conflict with this. The timeline of the world of TERA states that the Argon War was ended in 276 VC (VC, aka "Velika Clock", is closest to "year" in TERA lore, meaning when the city of Velika was created). The Crusades area takes place back in time when Velika was just being built. On the docks, you did find Elin NPC Zolyn searching her sister Syona. This proves that Elins live more than 200+ years. 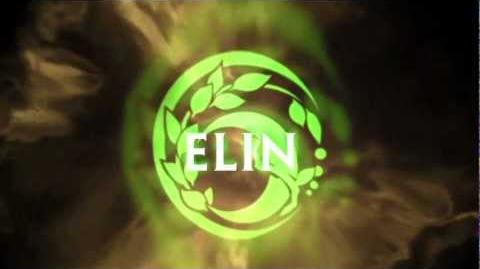