The Gunner is a class that has been introduced in the expansion TERA: Fate of Arun. This class is only available to female High Elves, Castanic and Elin races. The Gunner's best abilities rely on a resource called Willpower which is built using a variety of the skills available to the gunner. Once the gunner reaches 100% willpower, she's able to unleash a huge AoE skill in front of her blowing away anything that stands in her path.

The Gunner class also includes a summonable robot named HB-7 which can be blown up to stun enemies or used to quickly pull the gunner out of harms way. HB-7 is also able to heal the gunner when idle does small amounts of damage to mobs after the use of skills such as Obliteration and Arcane Barrage.

Gunners are fast-moving, high-DPS ranged combatants who never stops to ask questions—they’re too busy shooting first! A gunner combines fast-paced play with strategic use of summoned constructs, and positions herself to make use of the best skills for any given situation. A unique aspect of the gunner is how she uses Willpower to activate devastating attacks. A gunner generates Willpower every time she kills an enemy, and when her meter is full…look out! Willpower fades rapidly when not fighting, so don’t stop shooting until every enemy is rekt!

For more details on this topic, see Metal armor and Arcannon.

Gunners can choose to use either Energetic or power etchings.

Major part of gunner damage comes from Burst Fire. Burst Fire has ramp up feature and its crit chance raises quickly while firing. Therefore it's not necessary to stack much crit since it's wasted after 100% crit chance. Recommended crit rate for gunner is to go to 180 total crit rate and build power after that.[1] (Note: this is totally outdated level cap 65 guide).

Burst Fire Unload on multiple enemies at once with this Willpower-fueled skill, and keep firing penetrating shots until your bar is empty. Which may take a while, because you’ll get more Willpower with every kill. This skill is around 30% of gunner's total damage. Burst Fire has ramp up feature and its crit chance raises quickly while firing.

Balder's Vengeance snipe skill with high damage in one shot. This skill needs full Willpower to cast. Gunner is immune to damage while firing (except when hit by skills that cannot be i-framed). Balder's Vengeance also receives a 20% damage increase if cast during Modular Weapon system (see Apex Changes).

Bombardment is high damage burn skill. As of Apex changes this skill no longer needs Willpower. It loads 100 Willpower per hit and with Talent points allocated it has chance to load up gunner's Willpower fully. As the skill launches 11 missiles, this usually happens.

Arcane Barrage is gunner's basic damage skill. It fires energy pulse that passes through enemies damaging them. Other tap on skill button detonates the pulse at a point of your choosing. Your HB construct will fire bombs at the same spot to seal the deal.

Time Bomb. Very fast skill that does reasonable damage and gains lots or Willpower. This locks the enemy on place and throws him into air unable to dodge after which another, stronger explosion happens. This skill should be used before Burst Fire as second explosion gets same crit chance.

Mana Missiles is unique charge skill on gunner. It shoots multiple missiles after charged with triple crit chance. It loads faster when cast after Burst Fire or Rocket Jump.

Scattershot is useful filler skill or for getting your enemy’s attention. Not only does it deliver a spread of penetrating damage, but you’ll gain Willpower for each successful hit. Rolling Reload skill afterwards will reset this skill and power up damage for next shot.

Point Blank is close range skill. Swing your Arcannon to slam your enemies, then fire an explosive shot to knock you and them back.

Blast is gunner's auto attack skill. Its damage is low, but is cancels animations of other skills and reloads mana and Willpower. This skill should cast between each skills.

Arc Bomb is low damage stun bomb. It can't stun boss monsters, but is sometimes used as filler. It's useful in PVP and against smaller mobs.

With Apex gunner gets only two new attack skills:

Remote Trigger has two part. First tap on button launches time bomb forward. Second tap on action button lights up laser which sweeps vertically in front of gunner. When laser hits the time bomb, the bomb detonates. This means gunner must be rather near of target, since the longer it takes for bomb to detonate the further gunner it. (It should be noted that Arcane Barrage as similar functionality. Gunner should not hang back on maximum distance since this means dps loss.) This new skill has only 9 seconds cooldown, which means gunner can skip most low-damage fillers like Arc Bomb or Scattershot.

Modular Weapons System works like boost skill gunner is missing. It activates extra construct with extra guns that do extra damage when various skills are used.

Only three of the seven races are available to gunners so far. 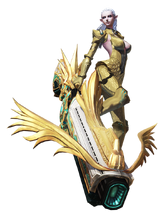 Add a photo to this gallery

Retrieved from "https://tera.fandom.com/wiki/Gunner?oldid=68575"
Community content is available under CC-BY-SA unless otherwise noted.