"Alone we gain hope, together we gain victory."

The humans of Velika are one of the seven races in The Exiled Realm of Arborea.


Known for their indomitable spirit, the humans strive for peace and civilization in Arborea. In order to achieve this, they founded the Valkyon Federation.

"Cursed by their god to wander without a homeland, humans turned their adversity to advantage by using their long exile as a learning experience. They studied the culture and crafts of other races, and forged their own destiny without guidance from their neglectful deity. Now, as creators of the Valkyon Federation, they are admired and respected by all the nations of the world for their role in bringing together the coalition that will defeat the argons and return the world to peace at last."

"The god Gidd created the human race but turned his back on them when they petitioned him for a homeland. When the first humans conspired to steal Gidd's priceless treasures, he cursed them to wander forever. As the Divine War drew to a close, the curse on the humans lifted. Velik, goddess of the hunt, took pity on the humans and granted them the homeland they’d long been denied. Their capital today is the beautiful city of wheels she created with them."

"Humans today are at the forefront of a new military coalition and political movement—the Valkyon Federation. Joined with five other races eager to put the divisions of the past behind them, humans are the dreamers, the builders, the uniters that make this time different from all times that came before."

"The stairs The City of Wheels. The City of Falcons. Velik's Dream. The magnificent human capital, built with her human charges by Velik herself, is known by many names. It is the political and cultural center of life in southern Arun—a vital and forward-looking city, despite the hardships of war. Velik's wheel turns ceaselessly at its center, providing magical energy to power the city's workshops and factories." 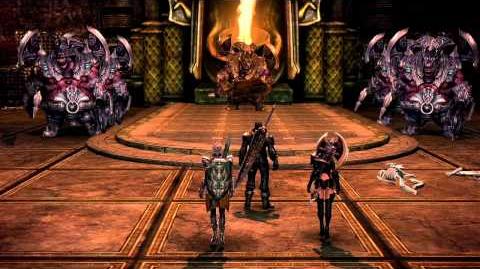 A male human and female human in-game around the coasts of Velika. 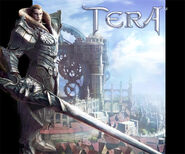