The lancer is a heavily armored class which specializes in a lance with melee defensive capabilities.

The lancer wields a large shield alongside its lance, which it can use to fend off most attacks. After fending off an attack, the lancer can counterattack with shield and lance.

"Stand fast at the heart of the storm, roaring defiance into the wind. Shield your friends and smite your enemies. Pin down your foes and laugh as they try to knock you down.
As powerful in defense as in attack, the lancer’s role in a fight is at the head of the formation. His heavy shield absorbs damage, while his lance provides striking power that’s targeted yet effective against multiple foes. Numerous skills for drawing aggro let the lancer take the heat and give his party members more opportunities. Lancers can minimize damage to their own party and help them devastate the enemy."

One of the original classes of TERA. Lancer is called "mitigation tank". This means lancer is meant to stand fast, keep boss' attention and block incoming damage.

For more details on this topic, see Metal armor and Lance.

The lancer is equipped with metal armor for great increase on the defense lines. Being of the rare classes to wear the metal equipment gives the lancer a big advantage, especially when the shield enters the scene of play. Although not the fastest of attack speeds, the Lance is a great weapon which fends off enemies in a direct cone of sight of the attacker toward the enemy, dealing massive damage to anyone within that range.

For more details on this topic, see Lancer skills.

Lancers are capable of an incredible amount of defense power thanks to their defending skill Stand Fast. When the enemy is vulnerable after a successful block, the lancer will abuse the chance and Shield Counter. Shield Counter can only be activated after successful block. It has high crit chance and lancer only take half damage while using the skill and also gets high resistance to knockdown and stagger. Blocking damage also gives lancer stacking buffs to their crit factor and power that last unless knocked down.

While enemy is not attacking, lancer should actively attack them to do damage. Doing damage also guarantees lancer retains aggro from monsters. Basic damage skills are

Shield Barrage which hits twice and

Spring Attack. Spring Attack does nice damage but must be comboed after other skills. Spring Attack gives about 1/3 or lancer's DPS. Lockdown Blow has lower damage and should be only used as filler skill, if its effect to slow down enemy is not needed.

The best lancer damage skills are Onslaught and Wallop. Both have 2× crit change and both also block all damage from front while attacking. Onslaught activates somewhat slowly and should be comboed after

Much power of lancer comes from skills that support other party members and increase their damage. Strongest lancer buff is

Adrenaline Rush that gives straight damage and attack speed buff. Skill should be used with other buffs active while boss is enraged to gain maximum damage burst benefit. Other lancer damage buff is Guardian Shout which has longer but has weaker effect and also gives defense buff.

All tanking classes have also skills to debuff the enemies. Lancer's

Debilitate gives enemy -12% endurance debuff. This debuff should always be kept up.

And if the enemy decides to change their mind and target a different group member, the lancer will pull it back easily with Leash, and if one leash was not enough,

Chained Leash will chain 6 enemies and pull them together and stun them. This skill is especially powerful in PVP and if you have fellow sorcerer or archer who can use their hard-hitting AOE skills like Meteor Strike or Rain of Arrows.

As tank class lancer has few special skills to improve their survivability:

Super Leap is high and long jump that deal damage and throws enemies into air on place when lancer lands. Also their attack speed and movement speed is reduced. While fighting monsters this skill should be used after Changing Lunge or Wallop. When cast after these skills lancer doesn't jump over enemies, but hits target in front. It's basically a second, high damaging wallop.

Guardian Barrier is alternative block, that reflects damage on attacker. It can also be used to give allies behind iframe protection against attacks. It can be used to cheat some dungeon mechanics, like AOE stuns, or even wipe mechanic.

Divine Protection gives lancer and party members 5 seconds protection from all damage. It has significant cooldown of 8 minutes.

Being able to pick between one of the seven races proves to be a tough choice. Each race has their own unique racial traits that can effectively improve the gameplay of the lancer, depending on race choice:

Generally two races are favoured for lancer: Elin, because their animations have longer reach, and some skills move them forward more. Elins also have wider block radius to compensate their small size. However, some boss attacks can hit you from behind even though you are blocking due the size. High elf male is favoured due fastest animation on Shield Barrage, a key lancer skill. Amani have average animations and reach, but best racial traits. It's possible to get over 90% damage reduction when on low health with Amani race passive. Amani male has faster animations than female.

For more details on this topic, see Hitbox.

Lancers have the unique ability to block attacks for those standing in front of them. They block attacks with their shield, and is based off the size of the model's hitbox. Hitboxes are based on race size, but have been "normalized" (slightly reduced for baraka and amani, and slightly enlarged for elins, poporis and castanics). Even after being "normalized" Baraka have the largest hitbox and elin have the smallest. When choosing a lancer race it is important to take the size of the hitbox into account as this will determine how much damage you will block for people behind you as well as how easy it is for the healer to target you.

As said before, the Lancers are unique in tanking. Warriors are also capable of tanking, but are based on evasion rather than tanking head on. In dungeons against bosses, lancers are always preferred over warriors.

Lancers have a rather low damage output. Instead, their skills are mostly focused on stunning the monsters, holding aggro and taking all the blows that enemies throw at you while taking the least damage possible, if any at all.

Lancers are very possible to play solo, but they level much faster in a party. When grinding BAMs, there are three things a lancer has to do.

Lancer's damage blocking capability depends on their lance. The higher item level the lance, the more damage absorption it has. When "bleeding" damage or missing a block, armor comes into play.

Also lancers need attack speed. There are several ways to achieve this. Picking +9% attack speed as first weapon roll is cheapest. More expensive alternative is to use double high-level Energetic etchings on weapon and gloves.

Correct crit rate and power/crit ratio for lancer is open to discussion. Some lancers use all crit rings, earrings and necklace and underwear. Others go for mixed build using one power ring and earring and rest crit. As lancer attacks enemies from front, stacking crit factor is of lesser value since lancer doesn't get 1.5 crit chance from back attacks. Also most lancer skills have low crit chance. As tanks also get lower crit power from front than other classes, some guides state that rolling your rings as 4 power and 0.04 more crit power gives bigger damage increase than usual 4 power and 4 crit rate rolls (Note: possibility to roll 0.04 on rings was removed at some point).

For more details on this topic, see Lancer glyphs.

Specializing in glyphs like all classes means a great deal to customization. Lancer doesn't have large number of usable glyphs and glyphs are quite expensive. Notable glyphs are:

These are buffing your main damage skills.

These are defensive skills.

Other quality-of-life improvement. Debilitate is low damage and this means it can be used less.

This is probably your most powerful skill in PVP.

Backstep Reload simply does not work, use waster points.

Special Weapon Crystals for tanking, including Wrathful and Focused crystals.

An high elf lancer going against a vulcan. 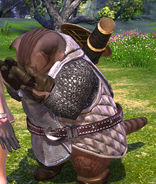