Magma Bomb was an active skill that can be taught to Sorcerers at level 4 and can be ranked up at later levels.

Magma Bomb can be performed with a disc by the Sorcerer to deal AoE damage 10 meters away. It is good for simultaneously taking out minions, due to their tendency to stay close together.

In PvP is was used to stagger opponent, and with enough attack speed it was possible to cast Mindblast on them before they can dodge. This was known as "magma sleep".

This skill was removed in sorcerer revamp (NA: Spellbound patch, EU Portentous Rebirth) in October 2016. It was replaced with Lightning Strike.

To obtain and upgrade Magma Bomb, one must find a Magic Instructor and pay a certain price of gold dependent on rank.

For more details on this topic, see Sorcerer glyphs.

To glyph Magma Bomb, a glyph must be obtained and learned only once. At level 60, a character has 50 glyph points available to spend on all available sorcerer glyphs. Most glyphs, specifically common glyphs can be purchased from a Glyph Master, while fine glyphs must be looted from enemies.

(Disclaimer: As NPC shop prices vary depending on a variety of factors, the prices below are subject to variation. Only take them as benchmarks.) 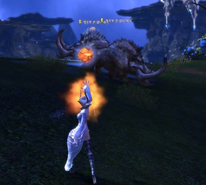 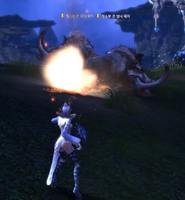 Add a photo to this gallery

Retrieved from "https://tera.fandom.com/wiki/Magma_Bomb?oldid=81298"
Community content is available under CC-BY-SA unless otherwise noted.