The mystic is a cloth armored class which uses a scepter for long ranged healing capabilities.

"A mystic walks a wild path, combat pets at her sides, wielding primal powers to harm and heal, empowering her allies while cursing her enemies. Mystics travel the whole battlefield freely. They fight at close quarters, healing and boosting allies, draining and destroying enemies. They channel powerful auras that enhance whole groups. They summon allies to draw aggro, to fight, or to heal, and can summon their entire party from one location to another.
Add extensive crowd control and the capability to resurrect fallen allies, and you can see why adventuring parties seek them out. They add to the longevity of any party, can seize an out-of-control situation and dominate it until their allies are on the offensive again, or simply unleash their own magical fury. Mystics make their comrades better at what they do—and a whole lot more."

Mystic is one of the oldest classes of TERA. No new healing/support classes have been released since game released.

Mystic had big changes in ninja patch in 2016. Old Titanic Wrath buff skill was removed and merged to Aura of the Merciless, which now gives both power and crit buff. Heals got more immediate and less over time. Motes can now be throw to distance instead of just dropping them. Also mystic got much higher damage output.

For more details on this topic, see Cloth armor and Scepter.

Although equipped with the weakest of all armour available, cloth armor, the mystic specializes in great healing abilities to remedy that. Equipped with a powerful scepter, the mystics are given control of Arun and Shara energy, allowing them to summon unique beings for their aid and supportive healing. The scepter also proves to be a great weapon when it comes to combat, more often than not allowing the mystic to be almost as great as any other offensive class.

For more details on this topic, see Mystic skills.

Mystics are capable of supporting their group members in multiple kind of ways.

Arun's Vitae, and motes that can recover mana with the help of

Arun's Tears. It's important to drop both types of motes preemptively.

Other mystic's healing skills are

Boomerang Pulse. As name implies, Warding Totem gives other members of party rather weak ~7000 HP shield for 10 seconds[2] in addition of healing over time. Boomerang Pulse is strongest mystic heal. It goes forth and returns to sender, healing allies both ways and damaging enemies. It's also has rather short range so mystic has to move actively to use it.

As TERA healers have other duties besides healing mystics gets powerful buff skills in form of auras. Mystic is capable of emanating two out of four constant auras which will improve the gameplay of the party.

Aura of the Tenacious constantly gives mana to party members, and

Aura of the Unyielding increases critical resistance which is useful in PVP.

For debuffing dungeons' bosses Mystic has

Volley of Curses and

Special skill that should be noted is

Corruption Ring. The skill has two parts. Activating it deals damage to all enemies inside the ring. Also while casting mystic is immune to stagger, knockdown and stuns. If glyphed mystic also takes only 50% of damage. This skill's notable use is to avoid stunning AOE attacks in dungeons while casting. Second tap on skill button gives mana to allies based on the damage done by ring.

Alongside of the priest, the mystic is given other skills aside from healing that can support the group in different ways, such as

Summon: Party (Mystic) which can summon all the party to the mystic, and

Resurrect (Mystic) which can revive the dead.

The mystic's resurrection signature spell is

Vow of Rebirth which allows the mystic to pre-resurrect a party member if that player dies. It is very important to glyph this skill to give similar effect to mystic themself, which allows them to resurrect themself if they happen to die.

For damage dealing mystic gets

Metamorphic Smite, which also has chance to knock down enemies. Also previously mentioned

Volley of Curses and

There are quite many mystic skills that are mainly useful in PvP.

Sonorous Dreams puts them to sleep,

Shara's Lash is stun attack up to 10 meters away which also slows down enemies, and

Regression can be used to cancel priest's blessing from enemies.

The mystic has four minions available for summoning at any given time with some cooldown restrictions, each having their own unique roles for combat situations, which makes mystic a very unique class. The minions can be killed in combat effectively unsummoning them:

Mass Teleport can teleport multiple group members. Basically it is additional Teleport Jaunt. It can also move group members, unfortunately it seems this skill can't really pull party members who are stuck behind closed door and such, like priest can do.

Arunic Release explodes motes in front of mystic. Motes heal allies and restore mana. This is also the most powerful attack skill mystic has.

Using Thrall Augmentation costs 200 mana per second and makes mystic very mana hungry. This made hard to use new thralls ie. in PVP since you run out of mana easily. This effect is now removed.

Being able to pick between one of the seven races proves to be a tough choice. Each race has their own unique racial traits that can effectively improve the gameplay of the mystic, depending on race choice:

Considering race skills alone the Baraka might be the best race for a Mystic, but since race passive skills do not make a groundbreaking difference and active skills such as Baraka's

Ancient Wellspring have notorious long cooldowns – which makes it impossible to rely on them –, the choice of your race will not drastically impact your gameplay as a Mystic.

Only remotely useful chest line for common PVE is Teleport Jaunt cooldown. Although damage from Metamorphic Smite can be used (rather as alternative option) for open world damage dealing. Also cooldown for Shara's Lash is sometimes used in PVP build.

Healers generally use all crit rings, earring and necklace. Earring should be rolled to +4% HP and endurance or -10% stun duration for PVP. For rings rolls are healing, mana regeneration or crit factor.

The Crit Factor cap for a Mystic is 500 when it comes to healing, which gives the character 100% crit heals. Generally speaking, anything above 400 Crit Factor will provide more than enough crit heals for most dungeons. It is advised you start with 500 CF in the first few runs when you're learning an end game dungeon, then you can start giving up some CF and go for other attributes when you're comfortable.

Mystic has many useful glyphs. Some are only used in PVP. Generally you need separate glyph page for dungeons, PVP and damage dealing (Guardian Missions).

The most basic and most important glyphs.

These are must in most PVE. Decreased cooldown for Resurrect is needed in harder dungeons.

This is used to tank some mechanics and to avoid stuns.

You must use this glyph and skill in PVE. Note: separate glyph "Increases effect duration" glyph *does not* work on debuff.

This is additional debuff on enemies. Use it to maximize party damage output during burn phases.

Persistent glyph is expensive. Use your own discretion.

This is must in PVE. Possibly too expensive for PVP.

Use these for open world damage dealing, like Guardian missions. Thrall of Wrath is also useful in dungeons.

or opposite glyph for Arun's Tears. Always cast them in same order. Then explode motes with Arunic Release.

Boomerang Pulse: Chain, this makes Boomerang Pulse kind of AoE heal. It can heal self, it never hits were you wanted and you can't deal damage with it anymore. Positive is self-heal. Negative is that you no longer have good heal you can target to ally with low HP. 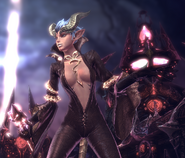