Nagas (아간티, Aganti) are enemies which appear throughout the game of TERA. Nagas in TERA are sentient race who worship their god Dagon and are capable of using magic and engaged in various economic activities, most famously pirating. These monsters vary from normal-sized monsters and minions to BAMs. 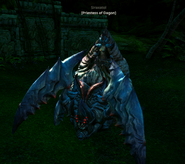 Nagas were created by god Dagon. After their god was killed Nagas hope to resurrect him. Efforts are mainly concentrated in Temple of Dagon in Val Palrada. Nagas seem to be lacking in magic and have recruited Melkonari to their aid.