The popori of Pora Elinu are one of the seven playable races in The Exiled Realm of Arborea.


Popori are magical animal-kin that make up their kingdom. They exist in harmony with nature and are guardians of their woodland realm, Poporia. They live at peace with the elin.

"The popori nation is made up of two distinct races. The elins—small female humanoids—were created by the goddess Elinu out of her own divine essence. The poporis are non-human beasts awakened to sentience by the elin. They are small, and accustomed to not being taken seriously. poporis are curious, candid, uncompromising, and utterly ferocious—resolute and tenacious defenders of nature. They are quick to learn, and quick to judge. Lose a popori’s respect and you may never get an opportunity to regain it."

"The Amanic War created deep scars on the continent of Arun. Elinu—the youngest dream-daughter of the titan Arun—wept for her father’s pain and determined to protect him. From her own divine essence, she created the elins. When the task proved too much for the elin alone, they in turn awakened animals to create the poporis. Together, they have worked to repair, protect, and preserve the world they live in."

"Recognizing the argons for the terrible threat they are to all of nature, the popori nation are willing and zealous allies of the Valkyon Federation. For as long as the federation’s aims and goals serve nature, Arun, and the memory of Elinu, the poporis will fight with the federation to protect the things they love above all else."

"The popori capital is a city in an enormous tree that grows in the middle of a sacred lake near Elinu's final resting place. The lake lies deep in a softly glowing forest that is eternally lit by stars not seen in other realms, where Balder's eyes light up the sky. High arched bridges and a single entrance to the city demonstrate the popori’s natural talent for defense. Through a thousand years of world-wide conflict, the city has never fallen."

There are several versions of the origin of the popori. Current lore tells that poporis were awakened to sentience by the elin. Earlier lore said that the popori were created by Elinu same time as elins. Third version is that Karas created poporis as a gift and toys for his wife Elinu.

Lore for the popori is shared with elin. After Elinu died, goddess Seren took over watching the elins, and popori. She hide them from outsiders for a long time. After they were finally revealed to the outsiders, humans started calling the monarchy "Popori Kingdom", even the rulers are the Elin Queen and nobility. The Popori Kingdom quickly allied with the humans and joined the Valkyon Federation when it was formed due the Argon invasion.

There are, however some poporis who are not under the rule of the Kingdom and are hostile. They are commonly called Feral Poporis. 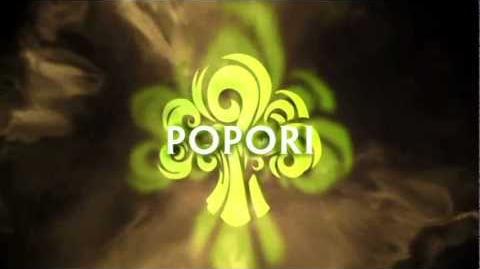 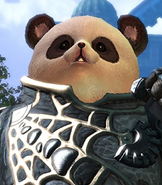 Official artwork background of a popori. 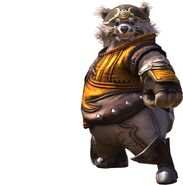 A popori outfitted in leather.