"Uniting the strength of gods and mortals."

The priest is a cloth armored class which specializes in a staff with long ranged supportive healing capabilities.
Power granted by the blessing of Shakan to enhance their powers and great worshipers of Yurian, the God of Justice, as they rely solely on him to aid in combat when healing is necessary the most. The priest one of the two healer classes in TERA alongside the mystic.

"Priests can bring allies back from the brink of death and beyond while burning and blasting their way through phalanxes of enemies. Priests derive power from their devotion to the gods, but it’s their devotion to others that earns them fame and friends on the battlefield. A priest has killing skills enough to survive alone in the toughest situations, and support spells to fortify, purify, and resurrect party members in need.
In fact, priests have more spells at their disposal than almost any other discipline. Priests are a support class that can also hold their own against foes. They keep themselves and their allies alive and regenerated while guarding them from critical damage, and still spare time to target foes for searing blasts of divine energy. They can target one comrade for healing, or remove poisons and curses from any nearby friendly player. They can stand up allies who have been knocked down, or put their enemies to sleep. It's no wonder that some say the party with the most skilled priest is the most likely to win victory in the field."

For more details on this topic, see Cloth armor and Staff.

Although equipped with weak set of cloth armor, the priest takes advantage on its ease of weight for improved meditation on the battlefield, allowing them to concentrate more and create powerful spells to fight against armies of evil, or support their party members. Equipped with a powerful staff, the priest is given control of attacking and healing abilities given many gods whom the priest wishes to follow, requesting justice and morale, allowing them to become a great role of being healer.

Most commonly used chest line is Kaia's Shield cooldown. Previously also Focus Heal boost was used as alternative choice. However, this skill was nerfed heavily in Apex patch and it's not worth using anymore.

Healers generally use all crit rings, earring and necklace. Earrings should be rolled to +4% HP and endurance or -10% stun duration for PVP. For rings rolls are healing, crit factor or mana regeneration.

For Weapon Crystals good choices are Carving for healing crits, Swift for additional movement speed and Brilliant for mana regeneration. Priest is not generally mana-starved and ranged DPS crystals Spiteful, Focused and Savage (in that order for PVE) can be used for additional damage.

Note that while most priest attack skills are short-ranged, all have been classified as ranged skills in apex changes. Therefore priest should use ranged classes' weapon crystals for damage dealing, like farming Guardian Legion missions.

For more details on this topic, see Priest skills.

In TERAs dungeons healers have many other duties besides recovering the party members' health. They give buffs to party, debuff the enemies and support party many other way, like giving them more mana or even bursting damage if needed.

Maybe the most well known of healing skills is

Focus Heal which works just like excepted. Lock-in to some party members and push button again to restore their health. It's also one of the weakest healing skills priest has.

Restorative Burst which is more pre-emptive skill that restores health over time and can also cast from distance. Wider heal that catches more allies is

Healing Immersion, that also has 8× longer cooldown, but chance to reset it immediately if glyphed.

One of the most important skills priest has is the

Kaia's Shield. It grants maximum of five party members shield, which absorbs damage, but also makes them immune to knockdown and stagger. Additionally it heals shielded targets if glyphed.

For debuffing enemies priest has

Triple Nemesis. This skill needs to be glyphed to give enemy reduced endurance. In dungeons you need to use this skill every 12 seconds to keep debuff up.

If everything else fails, priest can use

Resurrect (Priest) to revive slain ally. Remember to glyph this skill too to give patient 100% health and mana after resurrection.

Priests originally had total of five blessings to provide various buffs to party. Those were later merged to two buffs, and during apex changes last two buffs were merged to

Blessing of Shakan which increases power, increases endurance, increases movement speed, recovers health over time and increases resistance to all harmful effects. Remember to apply blessing to resurrected allies too.

Another important blessing-like ability is the

Grace of Resurrection which allows priest to instantly resurrect self with 100% health and mana if they happened to die in battle. This skill should always be used before starting dungeon fight.

Priest is also given other skills aside from healing that can support the group in different ways, such as

Summon: Party (Priest) which can summon all the party to the priest and unique skill

Arise to instantly arise party members if knocked down.

For damage dealing priest gets

Final Reprisal. Priest's Metamorphic Blast has unique effect: it gives next attack skills within 2 seconds +50% critical chance when hitting enemy. Final Reprisal itself it low damage skill unless cast after Shocking Implosion with powerlink glyph to give skill 40% more damage. Finally the most powerful attack skill,

Zenobia's Vortex, which also lifts enemies to air for short period to prevent them moving or attacking. This should also be comboed with Metamorphic Blast. The other long-range attack skill

Triple Nemesis is pretty weak and is mainly used to debuff enemies, although 3rd hit hits much harder.

Overall priest is quite strong damage dealer in open world, like in Guardian Legion missions but gets reduced damage in dungeons where main task is support.

Edict of Judgment is new powerful dps burst skill. It buffs priest's damage skills and group power by 20 and crit factor by 30. However, healing and shield skills are not available. Some attack skills have buffed damage or range and attacks also restore health and mana to allies. All attack skills priest uses are counted as attacks from the rear. If needed, priest can cancel this still by pressing skill button again to continue with healing skills.

Being able to pick between one of the seven races proves to be a tough choice. Each race has their own unique racial traits that can effectively improve the gameplay of the priest, depending on race choice:

For more details on this topic, see Priest glyphs.

Specializing in glyphs like all classes means a great deal to customization.

Some recommended glyphs are:

These are basic glyphs that should be used in dungeons to maximize party damage output.

This skill is very important should priest happen to die. Glyph + cooldown reduction reduces its base cooldown of 15 minutes to less than 5 min.

Resurrect is a very important skill is harder dungeons. Least Hearty Resurrect should be used.

Depends on your gear and crystals, but if self-healing is too low, use this.

Kaia's Shield is one of the most powerful priest's skills. With glyph + cooldown reduction its cooldown is down from 50 seconds to ~20 sec. As shield lasts 12 seconds, it has over 50% uptime.

This is more powerful version of Focus heal.

If priest misses cleanse on some party members, it can be cast almost immediately again with this glyph.

As this is only priest's iframe. Especially useful in PVP.

Each hit with Zenobia's Vortex reduces Edict of Judgement cooldown by 2 seconds. Spamming this skill is good idea for Apex priest.

These glyphs are mainly for PVP.

This glyph is mainly useful in GVG or CU. But if you have 1 glyph point left put it here. 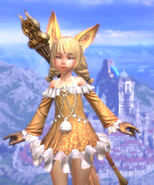 A female castanic priest on a