Saleron’s Sky Garden is TERA’s ninth instanced dungeon, aimed at level 55 characters but available to any level 53–58 character through Instance Matching. It’s a respectable size at five boss fights—and with three of the five fights spawning a random boss, it has a lot of replay value. With eleven possible bosses, every run will be different.

Just after you arrived in the amani city of Kaiator in Northern Shara, the god Killian assassinated its commander, General Kanmur, and one of Killian’s jesters dropped the body right in front of you. The goddess Kaia, realizing that Killian and the god Thulsa were baiting her, sent you to Sylvanoth to disrupt their plans.

You recovered Isrenia, the intelligent and powerful staff of the goddess Isren, who revealed Thulsa’s plan: to transform the mighty, sleeping god Sikander into a horrible monster under Thulsa’s control.

You battled past hordes of Thulsa’s and Killian’s minions, then through armies of Sikander’s loyal followers. Despite your heroic efforts, Thulsa awakened Sikander in a corrupt form: Kelsaik, harbinger of annihilation.

However, you disrupted the ritual enough to put Kelsaik beyond Thulsa’s control. The goddess Kaia suggested that Saleron, an ancient god imprisoned in Val Elenium, might have a relic powerful enough to dispatch the rampaging Kelsaik—but you’ll have to find it before Thulsa and Killian do. 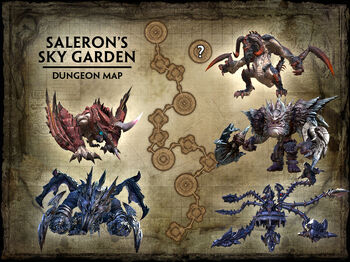 Retrieved from "https://tera.fandom.com/wiki/Saleron%27s_Sky_Garden?oldid=48038"
Community content is available under CC-BY-SA unless otherwise noted.