The sorcerer is a cloth armored class which specializes in a disc with long ranged offensive damage-dealing capabilities.
Although what seems the weakest of all in terms of defense, the Sorcerer is full of great knowledge in magical spells varying from strong area attacks and devastating fireballs for a quick destruction.

"Sorcerers fight from range, shaping magic through an arcane disc, channeling the force of will into sheets of flame, icy blades, and spheres of pure energy. The sorcerer strikes and evades and strikes again, flanking the foe, leaping out of danger, playing a game of position. With only sorcerous robes for protection, staying clear of attacks is vital, and dealing massive damage in a spectacular fashion is all in a day's work for this explosive class.
Warriors of the intellect, sorcerers are at their best when they stand apart, watch for vulnerability, and then make their foes pay dearly for it. Sorcerers may not be as flexible as other classes, but when your close-quarters companions fall in battle it's awfully nice to have arcane artillery at your disposal."

Sorcerer in one of the oldest classes in TERA, one of the original two range DPS classes. The class was known for its very slow and hard-hitting "nuke" attacks. Original version of Meteor Strike was called Fireblast and its cast time was 12 seconds. Some skills locked player in place, with not possibility to move or dodge. This does not work well with TERA's highly dynamic playstyle. Sorcerer got skill called Burst of Celerity which speed up all casting by 20%. This made Fireblasts reasonable, but made some other skills, like dodges to look completely silly with such high speed. It should be also noted that some of sorcerer's skills are instant with zero cast time, and attack speed does not affect those at all.

Sorcerer rework happened in October 2016 patch called by EME: Spellbound patch, by GF: Portentous Rebirth. As part of rework sorcerer had major changes. Several skills were renamed. Burst of Celerity got added as passive skill and other skills adjusted to match animation speed. Sorcerer's skills in general no longer hit much harder than ie. berserker's or slayer's. Also during the rework mana management of sorcerer is greatly simplified. Sorcerer no longer needs to use special skills to keep their mana up.

For more details on this topic, see Cloth armor and Disc.

The sorcerers lack of healing abilities combined with the poor defense provided by cloth armor leave them physically vulnerable class. As such, sorcerers are often played defensively, and striking when a suitable opportunity arises. The disc equipped by the sorcerer is used to channel powerful magical spells that take the form of fire, ice, lightning and mental energy to damage their opponents.

For more details on this topic, see Sorcerer skills.

Sorcerers are capable of casting powerful magic and utilizing elemental attacks that range from fire, ice, lightning and mind elements. This aspect is made more apparent with Sorcerer's Awakening and skills are now divided to three categories: fire, ice and arcane magic.

From fire resources, the sorcerer is best known for

Meteor Strike, a powerful hellfire flame that deals damage to foes in front of the sorcerer.

Other main damage skills are

Sorcerer doesn't directly have combo skills. However, there are two skills that buff other skills' crit factor after cast. The

Arcane Pulse is an unique charged skill that charges up and is sent in a straight direction, dealing damage to anything standing in the way. It has side effect of boosting crit factor 2.5 times for for 5 seconds (2.5× of sorc's base 50 crit factor = +75 crit).

Based on this we have basic sorcerer rotation:

These two chains don't take all the time Meteor Strike takes to be available again (around 9 seconds with single cdr roll). Pre-Apex sorcerer ends up using lots of low crit chance filler skills. The most common of these are

Painful Trap can be used when standing close to enemy.

Special aspects of some skill to be considered: while charging

Arcane Pulse sorcerer can move freely if proper glyph it used. Use this to relocate while in combat and you don't lose any DPS. While casting

Nova sorcerer takes only half damage and has high resistance to stagger and knockdown. This skill can be used for "Nova Tanking" some damage to avoid using dodges.

Special skill from ice resources is the

Hail Storm which freezes the ground and slows down enemies and damages them. This skill should always be cast when it's available, as it damages enemies over time.

Although weak when it comes to close combat, the sorcerer has multiple ways to counter that weakness with maybe second best dodge skills. Wrap Barrier makes sorcerer immune to damage for maximum of 2 seconds,

Mana Barrier will allow the sorcerer to endure damage in exchange for mana. In addition sorcerer can use

Stone Skin to turn to stone statue and became immune to all damage. Finally, the

Glacial Retreat, a chilly spell which will cause the caster to leap backwards, giving enough distance to continue a combo.

Ice Lances launches some ice spikes from side of sorcerer that hit targets up to 15 meters. Skill has zero casting time so it's basically free damage. Hit from Arcane Pulse or Nova increases Ice Lances damage by 30%, so the skill should be cast after either of those. Probably after Arcane Pulse, if Arcane Pulse is always used when its available, since skills have similar cooldown times.
Sorcerer discord advised usage for this skill is: "it has no animation so just smash it non stop like the good ape you are. 50 HPM or go home".

Fusion is actually combination of three different skills. Activating skill requires filling fusion meter with two different elements from Flame, Frost and Arcane. After two elements are used, one of the skills activates. Possible attacks are: Prime Flame (flame + frost), Arcane Storm (arcane + flame), or Iceberg (frost + arcane). Casting skill uses no mana and it hits harder and faster than Meteor Strike. Note: damage is reduced 20 % if two same attacks are used in row. For optimal damage you have to rotate your Fusions. Fusion has similar resistance to stagger and knockdown like Nova.

Implosion is new sorcerer "ultimate" skill with 4 minute cooldown. It's becomes active only during Mana Boost and after using all three elements (it still stays active for a while after Mana Boost ends). Using this skill raises sorcerer in air and they became invulnerable during cast. This skill has very long animation, but it can be cancelled with Backstep or Teleport Jaunt and skill still hits at the end of animation. During attack targets in area are pulled together and players get multiple staggers. 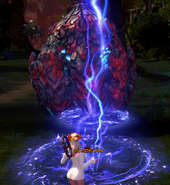 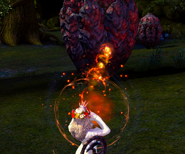 Being able to pick between one of the seven races proves to be a tough choice. Each race has their own unique racial traits that can effectively improve the gameplay of the sorcerer, depending on race choice:

Generally Elin is said to have fastest animations on skills. However Castanic race passive is especially important for sorcerer.

For gear with enigmatic rolls you can pick, recommended weapon rolls are Damage vs. enraged monster; Damage vs. enraged monsters; +6.9% damage from behind and Flat 6% damage, and cooldown reduction. With low gear that has only 4 enigmatic lines pick cooldown reduction as first roll. It's also possible to run double cooldown reduction. Recommended chest line is increased damage of Meteor Strike. (Crystals, rollable weapon lines incl. double cooldown and chest line are not available on level 68/69 Exodor gear or any gear released after that.)

Recommended build for PVE is the usual crit+crit power. Sorcerer main skills have rather low crit chance. However, sorcerer gets 75 crit bonus during most of the skill rotation. By some guides sorcerer should aim to have total crit rate of around 50+280. This can be achieved using crit rings, earrings, necklace and underwear. Part of this can be substituted with crit foods or Mystic aura.

After Exodor patch sorcerer discord recommends about crit: "If you just want one single setup for both healers aim for ~273 written in your profile without any buffs or consumables. Around 368 total is good value which ignores most RNG and temporary aspects."
This means recommended setup is 273 crit + high level priest with 36% buff + 20 crit food. Or 230 + mystic + 20 crit food for endgame content in early 2020. This may have changed with new dungeons higher and higher level bosses. Check discord for latest info.

With patch 93 new passives several sorcerer skills scale with maximum MP character has. Mana is quite hard stat to acquire. One 150 MP roll in gear seems to increase Meteor Strike damage by about 0.5 %. Amarun's Relic is recommended.

Sorcerer uses standard ranged Weapon Crystals: Spiteful, Savage, Focused and Pounding. If crit rate is low, Pounding can be switched to Carving. Choosing between a Pounding and Forceful niveot is left to user preference as there is little damage difference between the niveots.

Defensive crystals are the standard hardy niveots. For dyad secondary rolls, it is recommended to use Glistering rolls as the secondary roll for MP replenishment. As a sorcerer, mana is a major issue and Glistering replenishs some MP when the player crits from behind which helps alleviate the mana issue.

For more details on this topic, see Sorcerer glyphs.

These are your main damage skills in PVE.

These are for last bits of DPS in PVE.

You dodge and defensive skills.

These skills are mainly used in PVP.

Flame Pillar is used in PVP as it staggers enemies. Also it can be used to fight large number of mobs since it hits every target with equal force.

This is mainly for PVP to slow down enemies and speed up Mindblast. Although Frost Sphere is used in PVE to give Ice effect to Apex Fusion skills and cooldown reduction might be needed.

Don't use points to give skills "Burning Wound" debuff or buff Burning Breath. These are useless.

Hail Storm: Cold Wave is very useful when soloing. Other unlocks have seen use in PVP.

Glacial Explosion seems good for PVP. Its damage is similar to Meteor Strike, only with lower crit chance, which does not matter in PVP. Do not use Glacial Explosion in PVE. It has few % lower base damage than Cold Wave. Also getting constant frost effect for Fusion skill is nice. Frostbite is hardly useful. No one is so stupid they would stand in puddle of ice to get maximum stack.

Mana Boost: Mysterious is only reasonable choice for any purpose.