Summon: Honor Steed is a skill that allows the summoning of a ride-able Honor Steed mount which runs at a movement speed of 290, being the current fastest mount in TERA: The Exiled Realm of Arborea.

The Honor Steed is automatically learned by being part of a guild whose guild leader is a vanarch, a politic ruler of a province. As such, this mount is available to all members of such guild. Assuming the guild has been elected when a character is logged out, that character will learn the skill upon logging in.

This mount has conditions of loss, as such when one of these requirements are met, the skill will automatically be unlearned and will not come back unless the guild has been elected once more. 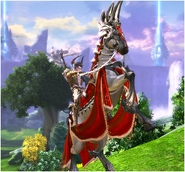