The warrior is a light armored class which uses a pair of twin swords for melee damage-dealing or tanking capabilities. The main traits of the warrior are their agility and fast execution skills. Although not the best when it comes to defense, the warrior makes up with its mobility and fast movement speed.

Korean name for class is geomtusa (검투사) or gladiator. Gladiators who fought with twin swords were known by name Dimachaerus in Ancient Rome.

"A warrior deals damage with impressive, deadly feats of swordplay while weaving in and out of enemies' attacks. It's the warrior's way to dive into the middle of the fray and mow down the opposition. Invulnerability while using the Evasive Roll skill means the warrior can do enough damage to hold aggro, and still dodge and roll out of harm's way. Coming up from behind an opponent after a roll enables the warrior to strike from behind, before his opponent can turn and counterattack.
The warrior's deft moves and quick dodges make it easy to hold aggro while avoiding damage. Quick to make decisions and quicker to draw swords, the warrior will not fall back on the battlefield. If you've misplaced your warrior, always look ahead—never behind."

Warrior in one of the oldest classes in TERA, one of the original two tanks (original classes were two tanks, two melee dps, two ranged dps and two healers). Warrior was dubbed as "Evasion Tank", a term that is still occasionally seen. Warrior was meant to keep boss attention while using dodges to avoid attacks. In practice this didn't work that well. Warriors got a block skill to mitigate attacks and proper DPS mode. In level 60 patch warrior got combo points system (like rogue class from certain popular MMORPG) to build combo points to use a finishing skill for a high damage hit. In DPS role warrior was a low-damage DPS class, specialized in debuffing enemies, until to class rework.

In class rework warrior was buffed to a high damage DPS class that instead of debuffs builds attack speed. Also rework got rid of so-called "shared Edge". Before rework combo points were shared which lead to DPS loss when there was more than one warrior attacking same enemy.

Warrior differs from other classes due to its ability to switch between Assault Stance that provides extra critical factor or Defensive Stance for tanking to boost endurance and balance.

Warrior tank has prolly the highest damage output of all tank classes and with buffs on par with Lancer. Although sometimes scorned by healers, since warrior tanks tend to often facetank boss attacks. Some warrior skills cut damage taken to half and also resists staggers and knockdown while used, a remainder of their tank role.

In PVP warrior is mostly played in Defensive Stance to allow blocking attacks. Warrior is generally good and even overpowered in duels and small scale fighting, but not favored in mass PVP.

For more details on this topic, see Leather armor and Twin swords.

Geared with leather armor, the warrior takes advantage of such ease of weight in order to excel in mobility above all other classes. With the right amount of timing and precision, the warrior can hold down an enemy easily to a point where it could be considered a tank. Equipped with a pair of powerful twin swords, the warrior can use them to create large, quick and powerful attacks of damage to hit anything surrounding it as it dodges attacks.

For more details on this topic, see Warrior skills.

Warrior are the most flexible class in TERA. Warrior can be played as offense damage dealing class via assault stance, or as a tank via defensive stance. However, Warrior starts with no stance and a stance must be switched on upon login, and each stance providing unique passives for their respective roles.

Dealing damage with warrior is heavily based on executing chained skills or combos and a system called Edge. Warriors increase their Edge counter by executing certain skills with generated edge being spent on

Scythe (Warrior) or Aerial Scythe. This skill alone contributes to around 40% of warrior DPS.

Other main damage skill is the

Blade Draw. Blade Draw alone casts very slow and requires itself to be chained after certain skills. When glyphed, Blade Draw generates 2 Edge, has a 50% chance to reset (60% after Apex) and has double the chance to crit. Common chains to Blade Draw are:

Upon Blade Draw not resetting, filler skills are used to generate edge. Chaining Combative Strike into Rain of Blows should be prioritized, otherwise,

Poison Blade would be a decent skill that should be used as it generates 2 Edge, even if itself does marginal damage. Backstab generates 2 Edge (if glyphed) but has longer cooldown.

Scythe (Warrior) reaches its maximum crit chance 8 Edge and does it's maximum damage at 10 Edge, and anything over it is wasted. Scythe has to be chained from Blade Draw, Poison Blade, Rain of Blows, Evasive Roll, or

Defensive Stance warrior is fully featured tank. There are few skills usable only in this mode. Warrior can now block attacks with

Cross Parry. Cross Parry uses Resolve like Lancer's equivalent skill and block cannot hold forever. Correct timing on block increases Edge. Also warrior can counterattack with Blade Draw after blocking a hit. Other skill is Infuriate to force boss to enrage at the start of the fight.

For movement and evasion warrior gets standards skills: Backstab moves behind target and stuns target. Evasive Roll moves short distance and can be used to pass through enemies. Both skills also have iframe to dodge special attacks. In addition of these dodges warrior gets also

Death From Above, that generates Edge, and doesn't use Resolve like Evasive Roll does. DFA also keeps position. Generally warrior is thought to have best dodge skills of all classes since Evasive Roll can be cast four times in row with correct build and DFA has very low cooldown.

Warrior also gets quite standard boost skill for extra damage:

Perhaps the most peculiar skill of warrior is to summon shadows of themself. There are two skill that do this.

Smoke Aggressor summons a shadow that takes aggro from warrior and monsters start chasing the shadow. Also it's used to absorb damage, since shadow takes 50% of damage warrior would take during 20 seconds it lasts. Other version is

Smoke Flanker, only usable in tank mode. After blocking an attack and while holding the block, this skill summons shadow in front of boss and teleports the warrior behind the boss, while boss keeps attacking the shadow.

Blade Waltz is new skill that can be used to interrupt any other skill. Also it chains to Blade Draw and Scythe. It can be cast twice before cooldown hits. This skill totally changes how warrior is played. This skill can be used for 2 quick BD combos, and to interrupt Scythe animation after damage is done. It can also totally replace Rain of Blows as filler skill. This skill has improved crit chance (+10%) and 2.2× in Assault Stance. It also gives next attack skill double crit chance. In Defensive Stance it blocks attacks from front.

Aerial Scythe is second Scythe skill to spend Edge. This skill has two parts, first part gives 2 Edge and second hit uses all Edge. Therefore it should be cast at 8 Edge. This skill requires no combo, but can be cast anytime.

Blade Frenzy is high damage attack that also works as iframe. This is "ultimate skill" with several minutes cooldown. Last hit from the skill hits about twice the damage full Scythe hits. It should be cast after either Scythe for faster activation. This skill should be saved for Deadly Gamble and/or dragon proc.

Being able to pick between one of the seven races proves to be a tough choice. Each race has their own unique racial traits that can effectively improve the gameplay of the warrior, depending on race choice:

Castanic and Elin have long time been favourite races for min-maxing warrior due their animation speed. Human female is in par of these races. Female High Elf clearly have some problems with their Rain of Blows. This is not big problem since Apex.

Warrior differs from other classes in its build due to its ability to switch between Assault Stance provides extra critical factor or Defensive Stance to boost endurance and balance. Furthermore, Warrior main damage skill Scythe has a triple chance to land a critical hit when at full edge.

Scythe can reach its crit cap (100% crit chance) at 224 critical factor with a Castanic warrior being at 211 critical hit factor due their racial passive.[1] (Note: this only applies to level 65.)
However, more critical factor is recommended since casting scythe with lower edge, Blade Draw (2x crit chance), and other skills will have a lower base critical hit rate. As result warrior should be use mixed build with rings, earrings and necklace and underwear for desired crit rate + power ratio.

Weapon Crystals for tanking include Wrathful and Focused crystals. Carving is especially good for tanking since crit chance is same even from front.

Since crystals are now used only when leveling Wrathful is a good idea, since you end up fighting mobs mostly from front. It's possible this crystal does not drop anywhere or is available from merchants, so you have to Crystal Fusion to get one.

For more details on this topic, see Warrior glyphs.

This is your main filler skill before apex skills are unlocked.

Evasive Roll normally costs 500 of warrior's 1500 RE. This glyph allows warrior to do four Evasive Rolls in row.

Last two are most useful in PVP.

This is for getting last piece of damage, but expensive and low effect.

Warrior crit chance glyphs only work in PVE. You need to make other setup for PVP.

EP Damage is generally not useful.

Actually everything in this tab is useful. Your pick.

Level 69 Deadly Gamble options are reworked least 2 times after level 70 patch. Use Bellicosity for DPS mode, it increases Deadly Gamble duration by 20% while in Assault Stance.

Do not use Spirit of Iron unlock. If you want something like that, go play brawler instead. 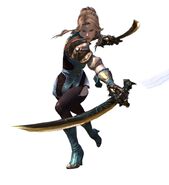 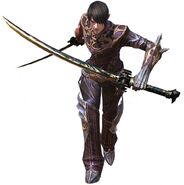